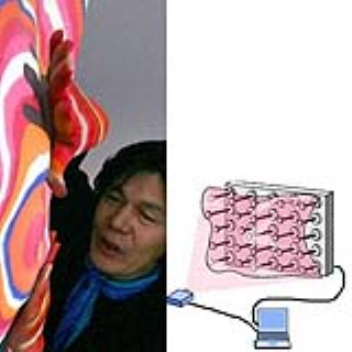 Gemotion is a soft, "living" display that bulges and collapses in sync with the graphics on the screen, creating visuals that literally pop out at the viewer. Yoichiro Kawaguchi, a well-known computer graphics artist and University of Tokyo professor, created Gemotion by arranging 72 air cylinders behind a flexible, 100 x 60 cm (39 x 24 inch) screen.

As video is projected onto the screen, image data is relayed to the cylinders, which then push and pull on the screen accordingly.If used with games, TV or cinema, the screen could give images an element of power never seen before. It could lead to completely new forms of media.