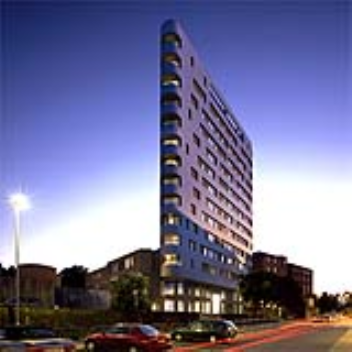 Clad in glazed tiles and featuring a stunning tower of helicalwindturbines at its spine, the fourteen-storey building makes a radicalarchitectural statement that will become a new landmark for EastLondon. As well as exceeding the Mayor's demanding targets for energyefficiency, this is a building that will signifi cantly benefit acommunity currently deprived of both decent housing and employment.

A key component of the design was to exceed the Mayor's target foron-site sources of renewable energy. Conceiving of the energyproducing/saving mechanics of the building as an integral part of thedesign was a challenging process, requiring the design team toinvestigate how the height and form of the building could best harnessthe wind energy at that location. The resulting form of the planensures that the tower acts as an aerofoil, concentrating the greatestwind speed to the spine of the building, where four turbines will beattached vertically, in a spiral form that is as visually stunning asit is innovative.

The turbines will provide the building with more than 15% of itsenergy requirements, exceeding the Mayor's targets for energy efficiency. Dependent on wind speed, the four turbines will generate around40,000kW hrs a year. This is enough to power an 80-person office, orthe electrical energy requirement of more than 40 flats and it willsave approximately 7 tonnes of carbon dioxide from being pumped intothe atmosphere every year.