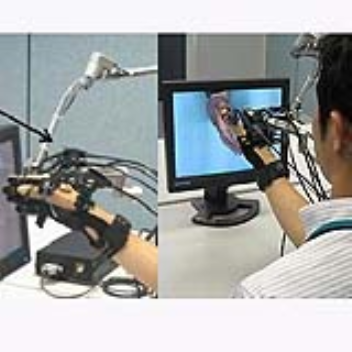 Researchers at NTT Comware have just made virtual reality a little morereal. On June 20, the company unveiled a 3D display system thatreproduces the physical feel of three-dimensional video by means of anactuator glove worn on the hand, allowing viewers to literally reachout and touch the person or object on the screen.

The so-called "Tangible-3D" prototype system is built around animproved version of NTT's 3D display which displays 3D images without requiring special glasses. The systemrelies on a pair of cameras that capture and process data about theposition, shape and size of objects as they are filmed. As the twovideo images are combined into a 3D image that is displayed on thescreen at the receiving end, the data is relayed to the glove, whosearray of actuators translate it into a tactile impression the user canfeel. The glove operates in real-time along with the 3D video, so theuser can "feel" the on-screen image as it moves.