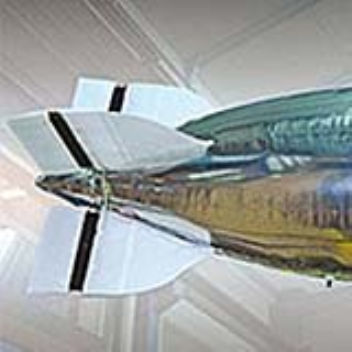 Airships that "swim" through the atmosphere

If the patented idea of Empa researcher Silvain Michel and his teambecomes established, then the airship of the future will be a non-rigidairship (blimp) that glides through the air as silently and using thesame means of propulsion as a trout swimming in a brook – by bendingits body in one direction and simultaneously moving its tail in theopposite way. The technically simplified version of this trout-likemotion, using three rigid, interconnected body segments, is known inscientific jargon as the “bending-rotation-stroke”, says Michel.

Electroactive polymers, which Empa has also been developing for useas artificial muscles, are practically tailor made as the power sourcefor a propulsion system based on the swimming action of fish. EAPsconsist of elastic polymer films which, when subject to an electricalvoltage, become thinner and expand in area as a result of themechanical forces which occur (see box). Regardless of whether thisdeformation is used to propel an airship, move an object or replacedamaged muscles, it occurs silently and efficiently. Because theyconvert electrical energy directly into mechanical work without theneed to use electric motors and gear systems EAPs reach energyefficiencies of up to 70 per cent.