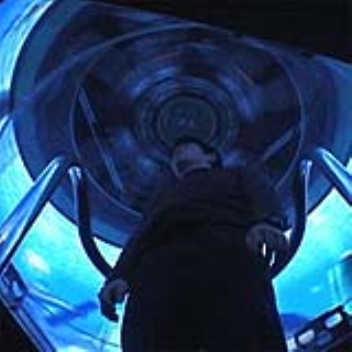 A research team led by Susumu Tachi from the University of Tokyo hasdeveloped a rotating panoramic display that immerses viewers in a 3Dvideo environment. The Telexistence Wide-angle Immersive STEReoscope,or Twister,is the world's first full-color 360-degree 3D display that does notrequire viewers to wear special glasses, says professor Tachi, who hasspent over 10 years researching and developing the device.

Inside the 1.2 meter (4 ft) tall, 2 meter (6.5 ft) wide cylindricaldisplay are 50,000 LEDs arranged in columns. As the display rotatesaround the observer's head at a speed of 1.6 revolutions per second,these specially arranged LED columns show a slightly different image toeach of the observer's eyes, thus creating the illusion of a 3D image.In other words, TWISTER tricks the eye by exploiting what is known as "binocular parallax" the apparent difference in position of an objectas seen separately by the left eye and the right eye.