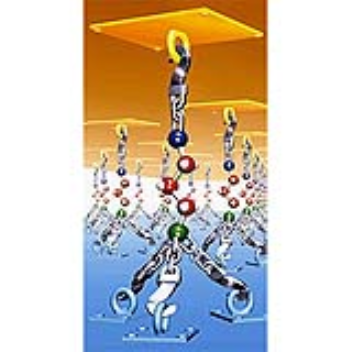 Nanoglue gets stickier when hot

They say the nanoglue, made from self-assembling nanoscale chains of molecules, could be used to 'hook' together two surfaces that don't normally stick well.

The glue has a backbone of carbon molecules. On one end of the chain is silica and oxygen and on the other is sulfur. These different end-molecules act as hooks that bind to other surfaces.

Scientists topped off the chain with a thin layer of copper that acts as a protective coating to help keep the molecules intact.

When heated to 400°C or higher, the copper and silica form a strong chemical bond, which increases the glue's stickiness by five to seven times. The glue could be used as an inexpensive way to connect any two materials that do not bond well.