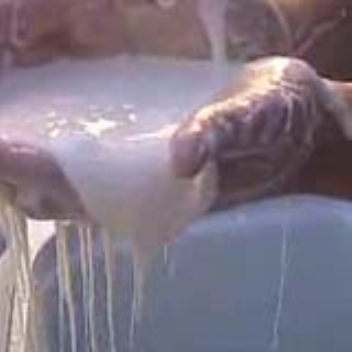 An inexpensive, non-toxic sample of a non-Newtonian fluid sometimes known as oobleck can be made very easily by adding corn starch (cornflour) to a cup of water. Add the starch in small portions and stir it in slowly. When the suspension nears the critical concentration- becoming like single cream (light cream) in consistency - the socalled "shear thickening" property of this non-Newtonian fluid becomesapparent. The application of force - for example by stabbing thesurface with a finger, or rapidly inverting the container holding it -leads to the fluid behaving like a solidrather than a liquid. More gentle treatment, such as slowly inserting aspoon, will leave it in its liquid state. Trying to jerk the spoon backout again, however, will trigger the return of the temporary solidstate. A person moving quickly and/or applying sufficient force withhis feet can literally walk across such a liquid.