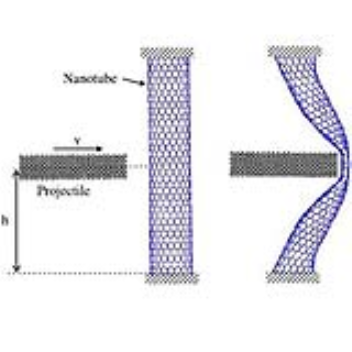 Scientists have designed a vestmade of carbon nanotubes that can rebound the force of a bullet,effectively causing the bullet to bounce off without causing a largeimpact force on the wearer.

Researchers, from the University of Sydney, explained how usingcarbon nanotubes as an antiballistic material may have severaladvantages over current materials, such as Kevlar, Twaron, and Dyneemafibers. These materials, which by weight are several times strongerthan steel, work by absorbing the energy of a bullet and dispersing theenergy across the vest's interlocking mesh network. However, the forceof the impact can still cause bruising and damage to internal organs.

Avest made of carbon nanotubes imbedded in other materials may greatlydecrease the impact force by elastically deflecting a bullet evenbefore its energy diffuses throughout the vest.