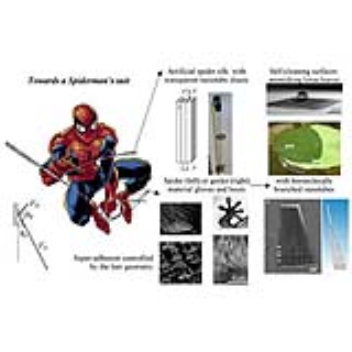 A physicist of the polytechnic school of Turin has developed a model of thespiderman suit.On the basis of calculations he confirms that it is possible to give people the abilities which the gecko or the spider has bymanufacturing a "sticky" package using carbon nanotubes.According to him, all necessary material is already available today.

The binding ability of geckos and spiders originate from the thousandsvery fine hairs on their legs, which can thank their functionailty by:
- capillarity strengths originating from a thin layer of water between thefibres and the surface,
- gravitational forces between the molecules of the fibresand those of the surface,
- velcro-effect of the fibres which entwine themselves with the finesurface structures.

In contrast to the adhesives, animals can detach itself easilyto move itself around.A self-cleaning impact is also observed: there is no accumulation ofsubstance on the bairs.