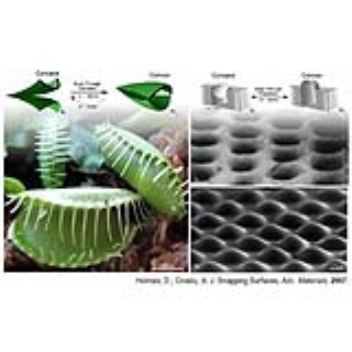 Inspired by the way a Venus flytrap captures its pray, Alfred Crosby and his doctoral candidate Douglas Holmes created a polymer surface covered with small holes capped by thin lenses of the same material. The lenses can snap between convex and concave when triggered.

Venus flytrap leaflets work in a similar way. Through a combination of geometry and materials selection, the flytrap leaflets snap from concave to convex when an object triggers their hairs. The key to the flytrap's ability to capture prey, and a key feature in Crosby and Holmes' material, is the speed and sensitivity that accompany a "snap" transition. For the Venus flytrap, the transition occurs in roughly 100 milliseconds, and the "snapping surfaces" can snap at least as fast as 30 milliseconds. Even more important is the fact that this speed can be easily adapted for faster or slower transitions depending on the final use.

This "snap" transition changes the surface of the material from a series of mounds to a series of depressions, a strategy that has great potential for creating release-on-command coatings, "smart" adhesives, adaptable optical devices or surfaces with responsive reflective properties.

"This material's design could allow for the removal of superglues, wallpaper and paints without toxic solvents, which would be an advantage for the environment," says Crosby.