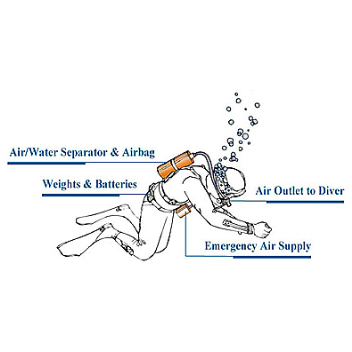 The idea of breathing underwater without cumbersome compressed air tanks has been the dream of science fiction writers for many years.

An Israeli inventor, Alon Bodner, turned to fish fir inspiration.
Fish do not perform chemical separation of oxygen from water; instead they use the dissolved air that exists in the water in order to breathe. Bodner's idea was to create an artificial system that will mimic the way fish use the air in the water thus allowing both smaller submarines and divers to get rid of the large, cumbersome compressed air tanks.

The system developed by Bodner uses a well known physical law called the "Henry Law" which describes gas absorption in liquids. This law states that the amount of gas that can be dissolved in a liquid body is proportional to the pressure on the liquid body. The law works in both directions, lowering the pressure will release more gas out of the liquid. This is done by a centrifuge which rotates rapidly thus creating under pressure inside a small sealed chamber containing sea water. The system will be powered by rechargeable batteries. Calculations showed that a one kilo Lithium battery can provide a diver with about one hour of diving time.