Industry: electronics × Function: help to achieve effective use of resources × 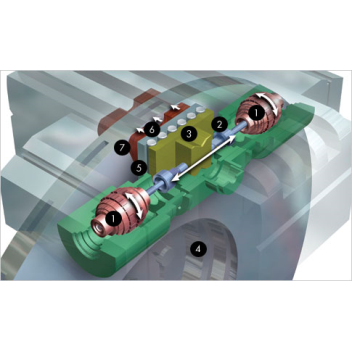 Despite all the auto-techbrain-power in this world, fully electronic brakes -which would replace brake fluid with lighter, quicker wires andmotors - have yet to arrive. The long-standing obstacle:Industry-standard 12-volt electrical systems can't drive a motorpowerful enough to stop a two-ton sedan. The prototype Electronic WedgeBrake, by German company Siemens, solves this problem by tapping thevehicle's own energy to slow itself down. Electric motors drivescrewjacks that move a corrugated outer plate fore and aft inplane with the rotor. Trapped between that surface and an opposingcorrugated plate are several small rollers. When the outerplate moves, it wedges the rollers between ridges in the opposingsurfaces, driving the inner plate and brake pad into the rotor. Thespinning rotor pulls the pad in its direction until the rollers are sotightly sandwiched that they stop the wheel. Look for Wedge brakes onyour 2009-model car.