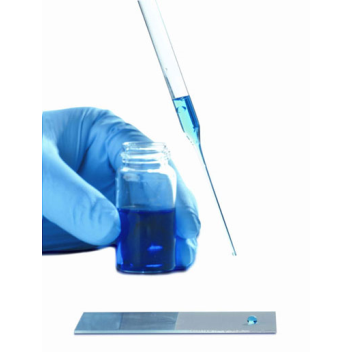 If you've ever despaired over getting the last drop of ketchup or detergent out of a plastic bottle -- or happen to be a microfluidics researcher wondering how you'll ever mass-produce a cheap diagnostics chip -- scientists at GE may have a plastic for you.

Company researchers have come up with a way to process a common polymer so that it repels fluid, even drops of honey roll right off. The resulting property is called "superhydrophobicity" -- or extreme repelling of water-based fluids -- beyond even that of a freshly waxed car.

While several existing engineered materials behave this way, the GE accomplishment is noteworthy because it was done with an inexpensive plastic, GE's Lexan, that's normally "hydrophilic," meaning water spreads out on contact, not something that's "hydrophobic" to start with, such as Teflon or silicone-based materials. These latter materials are far more expensive compared with Lexan, a ubiquitous thermoplastic used in products ranging from CDs and DVDs to automotive headlamps, food storage containers, and common household appliances.

While GE is not predicting specific applications yet, a few are theoretically possible. A cheap superhydrophobic plastic could be used in food containers from which every last bit of ketchup or syrup would flow right out. It could also allow for a building panel that repels water so efficiently that rain would wash away dirt -- making it essentially self-cleaning.

Such a material could be a bonanza for medicine, too. In the field of microfluidics, superhydrophobic materials are needed so that tiny volumes of blood or other body fluids can flow more easily through micrometer-scale channels. Although some superhydrophobic materials are currently available, they're expensive enough to preclude visions of diagnostic gadgets that you could buy in a drugstore. A cheap plastic, though, could make such a disposable diagnostic chip feasible. "It is a big deal and it is important for the microfluidics applications," says Neelesh Patankar, a mechanical engineer and microfluidics at Northwestern University.

GE has not published its research achievement, out of intellectual property considerations. But the company believes it's onto something entirely new. "To our knowledge, most if not all of the superhydrophobic materials that we had read about until the middle of last year [when the company made its first prototype] were starting with materials that were already hydrophobic. It's a lot easier to make them superhydrophobic. We started in the hole, with something that is hydrophilic. That is what was unique," says Margaret Blohm, advanced technology leader for GE's nanotechnology lab at its Global Research Center in Niskayuna, NY. "We have turned hydrophilic into superhydrophobic. We are probably the first group to do this."

GE accomplished this by modifying a material that's a mainstay of its plastics business. And they took their inspiration from the leaves of the lotus plant, which is naturally superhydrophobic; microscopic inspection of lotus leaves reveals their nanocrystalline wax structure. The lotus leaf surface has cells 5-10 micrometers wide, on top of which are tiny wax crystals that are tens of nanometers wide. On a lotus leaf, water beads look almost like perfect spheres.

GE set out to mimic this pattern on the surface of its polycarbonate material, essentially by "roughening" the surface in a specific way. Tao Deng, materials scientist at GE, is tight-lipped about the process, but says it was done with a "chemical treatment of the surface."

GE succeeded with its prototype last summer, but only began discussing the advance in recent weeks. One of the significant downsides is that the process leaves the plastic opaque, not transparent. That means it would not work for plastic windows or clear food containers. But a clear version is not far off. "That's coming," Deng says.

Even getting the opaque versions into real products will take some time. GE estimates it will be at least five years before commercialization, once the manufacturing issues are resolved. Five years isn't that much time, though -- about how long it takes for all the ketchup to drip out of today's plastic bottles.