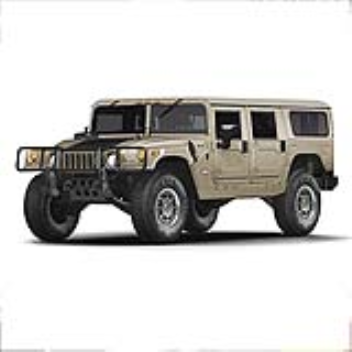 The Hummer H1 is a civilian vehicle based on the High MobilityMultipurpose Wheeled Vehicle (HMMWV), popularly known as the Humvee, which wascreated by AM General. The vehicle was produced from 1992 through 2006.

Originallyreleased in the civilian market in 1992, the Hummer H1 owes its birth to thepopularity of photos from Operation Desert Storm and the enthusiastic campaignfrom actor Arnold Schwarzenegger, who personally owns several variants ofHummer vehicles. GM announced that 2006 would be the last model year for theHummer H1 with production winding down in June 2006, due to a new emission lawsfor Diesel engine vehicles which take effect in 2007. No version of the HummerH1 ever produced would meet these new standards. AM General currently hasorders for an excess of 50,000 new HMMWV's to be produced between 2006-2009 forthe United States Military. AM General also will continue to produce the H1,just not the Alpha. These vehicles will be sold through Fleet sales. The nextH1 will most-likely bare a refined version of the prior 6.5L Turbo Dieselengine, but that has not been confirmed. Selling the H1's through fleet saleswill allow the AM General to not be subjected to the new emission rules andregulations. AM General has sufficient fleet orders to produce 600-800 unitsper year right now.