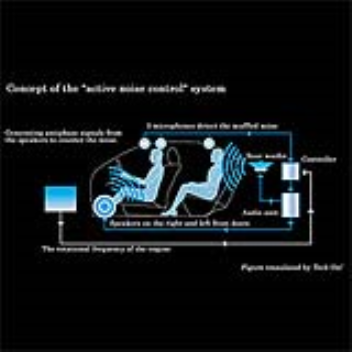 The principle behind noise-cancelling headphones is as elegant as it is simple - sample the noise to be cancelled out and use small speakers to create an equal, but opposite, sound that effectively erases the problem.

Now, Toyota has taken that concept and applied it to one of its high-end hybrid cars to reduce interior noise for the comfort of passengers.

The company's "Active Noise Control" system appears in the new Toyota Crown Hybrid car and reduces the noise inside the vehicle by up to 8dB. It was implemented after the car's engine was found to be noisier than expected as it rotates more slowly for better efficiency.

Toyota found that the low-frequency noises given off by the engine were more audible than in other cars with similar equipment under the bonnet and tackled it by first adding three interior microphones to listen in on cabin conditions.

Then, it installed three speakers - on the front doors and the rear shelf - to play back the cancelling signals. The car's music system can still be used at the same time, of course.

Unlike headphones, the in-car system has to deal with both direct noise and its echo when it bounces off interior walls. The result is a system that cancels out the engine sounds around head height - right where our ears are, in other words.