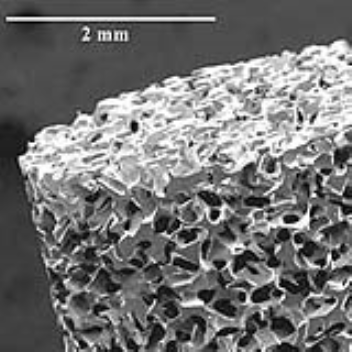 Scientists have created metal foam made of a nickel-manganese-gallium alloy; metal foam is enough to wrap your mind around, but this is pretty much a super material. It's cheaper, lighter, and potentially stronger than other materials that have its most defining property: it can return to its original shape after being deformed by physical or magnetic force. This is the very first foam with magnetic shape memory.

Because it's a metal, scientists can manipulate its shape using magnetic fields, or just the traditional method of smashing it. Scientists hope the foam can be used in tiny motion control devices, space born applications, or in mechanical devices without mechanical parts. Kind of like the ghost in the machine, don't you think?

By turning on a magnetic field the foam will change shape. Once the field is turned off, the metal maintains its new shape. To get it to start reforming to it's original shape, simply rotate it 90 degrees. If you're not familiar with the properties of a magnetic field, this seems like an odd thing to do to make a metal foam start reforming itself to its original shape. But imagine turning a magnet 90 degrees with respect to its poles: you'll have one end that attracts metal suddenly replaced by the end that repels it. Those 90 degrees reverse the direction of the polarity and cause the foam to reshape itself.

The researchers created the new material by pouring molten alloy into a piece of porous sodium aluminate salt. Once the material cooled, they leached out the salt with acid, leaving behind large voids, hence the foam structure.