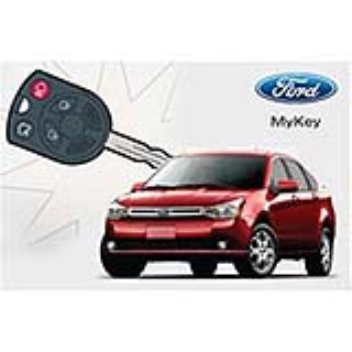 create the ability to control function delivery to specific requirements

The MyKey system from Ford enables parents to limit not only thespeed of the vehicle, but the audio volume as well. That's pretty niftyand interesting - after all, teens need to let out their angst throughmusic, so a cap on volume level is most welcome to geezers like me.

The MyKey feature will roll out in 2009 onwards as standardequipment on the 2010 Focus coupe, and it will also be a standardfeature on other Ford models to follow including the Lincoln andMercury lines. Owners will be able to program a key to limit thevehicle's top speed and audio volume, where the former will be limitedto just 80 mph while the audio system cannot pump out anything morethan 44% of the maximum volume. Perfect to let the parent sitting onthe passenger side in front to continue nagging the new driver besidewithout having the latest track from Linkin' Park drowning out theone-sided conversation.

In addition, one can also program in speed alerts that chime at 45,55 and 65 mph speeds. This reduced speed function works great sincefuel economy can be improved as well, as research has shown thatdriving 55 mph instead of 65 mph consumes 15% less fuel, while beingforced to mastering eco-driving habits such as avoiding jackrabbitstarts and excessive idling will be able to further improve fueleconomy by over 50%. The MyKey system also has an earlier low fuelwarning at 75 miles to empty instead of the usual 50 miles, which willprevent parents from getting a call in the middle of the night to driveout and meet their kid in a stalled vehicle that's run dry.