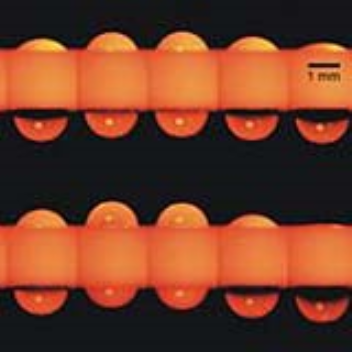 A water lens for a better camera

The next time you take a trip to the water cooler, just think, what you're about to drink isn't just good for hydration; it makes for a very effective, energy-efficient lens, too. That's what researchers at the Rensselaer Polytechnic Institute have announced after designing and testing an adaptive liquid lens, comprised of a pair of water droplets, that captures 250 pictures per second.

Unlike existing techniques used in liquid lenses, the new version does not manipulate the size and shape of the surface area the liquid touches to get an image to focus. The latest imaging technology leaves the water at a constant on the surface area and uses high-frequency sound waves to vibrate the water droplets back and forth at a significant speed through a cylindrical hole. This in turn changes the focus of the lens. During this process, imaging software automatically captures streaming frames that are in focus and rejects those that are not. Rensselaer researchers say the method uses substantially less energy overall than present liquid lenses and could be the next step in a new generation of light-weight, low-cost cameras in cell phones, cars and even security equipment.