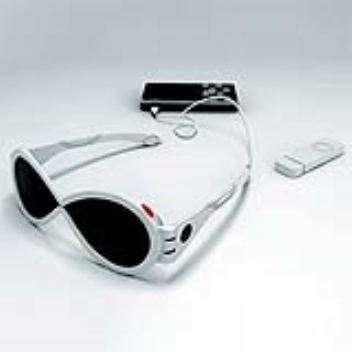 The glasses themselves don't need power to block the sun's rays from your eyes. That's power-free. The SIG, or "Self-Energy Converting Sunglasses" are quite simple. The lenses of the glasses have dye solar cells, collecting energy and making it able to power your small devices through the power jack at the back of the frame.

The dye solar cell is described by the designers of the SIG as "cheap organic dye [used with] nano technology [providing] cheap but high energy efficiency." Inexpensive, light, and visible-ray penetrable. The lens turns sunlight rays, (rays that would otherwise harm the eye,) into electrical energy.