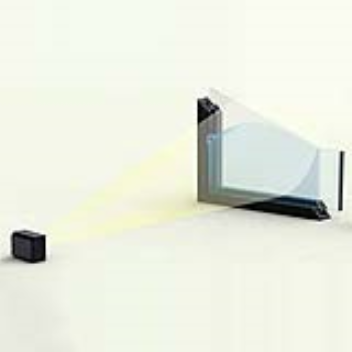 Imagine if the windows in your home or business could be used as motion detectors to sense a potential intruder before they even attempted to break in. Well that's the idea behind the "Vigilant windows" being developed at the Fraunhofer Institutes for Applied Polymer Research. The glass is coated with a special nanoparticle material that converts light into fluorescent radiation. As UV light hits the glass, the fluorescent radiation is then channeled to sensors along the edge of the window, and all is well.

But when someone or something passes by the window they block the amount of light hitting it, which reduces the amount of fluorescent radiation being produced, which can be measured by the sensors and used to trigger an alarm. In fact, with sensors installed on all four sides of a window frame the system can even extrapolate the size of the object, which direction it's moving and how fast it's going.

At the moment the Vigilant window system is still in development, but demo systems already exist and the researchers claim the special nanoparticle coating can be easily applied as a spray-on finish or as a glued on film.