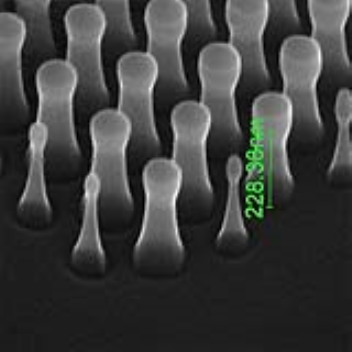 Researchers from the FOM Institute for Atomic and Molecular Physics(AMOLF), located at the High Tech Campus in Eindhoven, and PhilipsResearch developed a method to drastically reduce the reflection oflight at the interface between a high refractive index semiconductorand air. The researchers were inspired by the eyes of moths that arecovered by tapered nanostructures. Thanks to these nanostructures,night moths are capable of seeing very well in the dark. The results ofthe research have recently been published in the prestigious journalAdvanced Materials.

Light travels as astraight beam in homogeneous media. The direction of the light beamchanges when it arrives at an interface between two different media. Afraction of light is reflected into the first medium and the rest isrefracted into the second medium. At large angles of incidence at aninterface between air and a solid material such as a semiconductor,nearly 100 % of the light is reflected. Interfaces which reduce thisreflection exist in nature. For example, the eyes of a moth are coveredwith tapered nanostructures, which increase the eye sight of the mothin the dark by allowing more light to enter the eyes.

Inspiredby these biostructures, researchers from AMOLF and Philips Researchdeveloped a method which drastically reduces the reflection between airand a semiconductor. This method consists of the growth of nanowireswith different lengths or with the same length, but conically shaped.Using this method, a gradual change from air to semiconductor isachieved, which leads to an efficient coupling of light into thesemiconductor and minimizes the reflection. These layers show a largereduction of the reflection over a broad range of colors and angles ofincidence. The reduction of the reflection is of importance fordifferent applications. A low reflection can not only increase thesensitivity of a light detector, it can also increase the efficiency ofsolar cells and LEDs. The results of this research are published in theprestigious journal Advanced Materials.

This work is part of the research program of theFoundation for Fundamental Research on Matter (FOM), which isfinancially supported by the Netherlands Organisation for ScientificResearch (NWO) and is part of an industrial partnership program betweenPhilips and FOM.