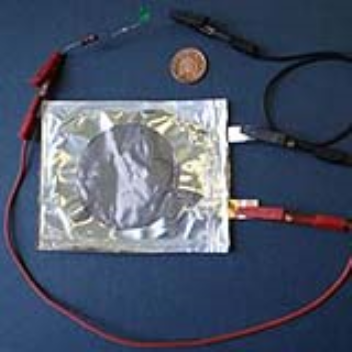 The lithium ion batteries used in laptops and cellphones, and tipped for future use in electric cars, are approaching their technological limits. But chemists in the UK say that there's a way to break through the looming energy capacity barrier - let the batteries "breathe" oxygen from the air.

A standard lithium ion battery contains a negative electrode of graphite, a positive electrode of lithium cobalt oxide, and a lithium salt-containing electrolyte. Lithium ions shuttle between the two electrodes during charging and discharging, sending electrons around the external circuit to power a gadget in the process.

The problem with that design, says Peter Bruce at the University of St Andrews, is that the lithium cobalt oxide is bulky and heavy. "The major barrier to increasing the energy density of these batteries is the positive electrode," he says. "Everyone wants to find a way to push up the amount of lithium stored there, which would raise the capacity."

The answer, he thinks, is to borrow an idea from the zinc-air batteries used in hearing aids, which get their power reacting zinc with oxygen from air. So, working with colleagues at the Universities of Strathclyde and Newcastle, Bruce has begun designing a lithium-air battery.

The new battery has a higher energy density than existing lithium ion batteries because it no longer contains dense lithium cobalt oxide. Instead, the positive electrode is made from lightweight porous carbon, and the lithium ions are packed into the electrolyte which floods into the spongy material.

When the battery is discharged, oxygen from the air also floods through a membrane into the porous carbon, where it reacts with lithium ions in the electrolyte and electrons from the external circuit to form a solid lithium oxide.