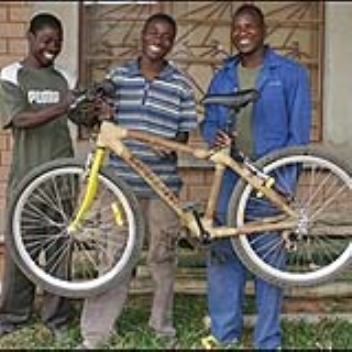 On the outskirts of Lusaka, Zambia, next year's crop of bicycles is being watered by Benjamin Banda."We planted this bamboo last year," he says, "and now the stems are taller than me. When it's ready we'll cut it, cure it and then turn it into frames."

Mr Banda, is the caretaker for Zambikes, a company set up by two Californians and two Zambians which aimed to build bikes tough enough to handle the local terrain.Co-founder Vaughn Spethmann, 24, recalls how it all started with a game of football.

"We were here on a university field trip and we organized a match against some locals. Afterwards we asked them what they did, and they said: 'Nothing'. They didn't have jobs. "So we decided to come up with a business which would be a source of employment and provide a useful product." That product was the rugged, bright yellow Zambike, assembled at the firm's smart red-brick workshop set in sun-browned farmland.

Other projects followed as the mechanics' skills improved: a sturdy cargo bike, a bike trailer and a bike-drawn "zambulance", now in use at 10 clinics around Lusaka.