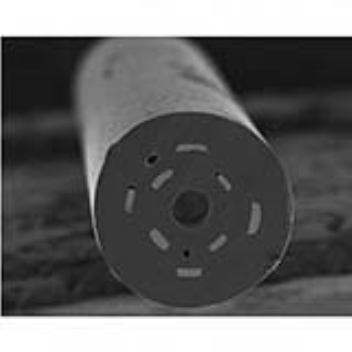 Imagine that instead of carrying a camera in your jacket pocket, your entire jacket was the camera. That is the promise of a new type of light-detecting fibers developed by researchers at MIT. The team from the Institute's Department of Materials Science and Engineering (DMSE) has developed light-detecting fibers that, when woven into a web, act as a flexible "camera". Fabric made from these fibers could be joined to a computer to create a large, foldable telescope or made into a soldier's uniform to provide greater situational awareness.

The researchers, led by DMSE Associate Professor Yoel Fink, emphasize that while such applications are still years away, work is progressing rapidly on developing fabrics capable of capturing images. In a recent issue of the Journal Nanoletters, the team reported what it called a "significant" advance in using a fiber web to take a rudimentary picture of a smiley face.

The new fibers are less than 1mm (0.04in.) in diameter and composed of eight nested layers of light-detecting materials. To make the fibers, the researchers arrange the semiconductor glass sensors in a polymer cylinder with a diameter of 25mm (0.9in.). When the sensors are in position, the cylinder is heated and stretched until the diameter is just a few hundred micrometers. This extrusion process is the same method currently used to manufacture commercial optical fiber for telecommunication applications.