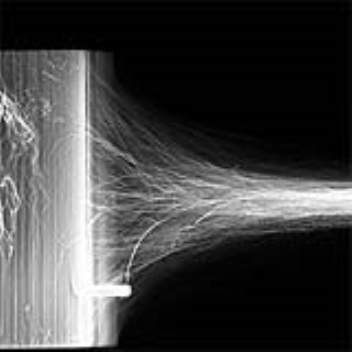 Researchers for decades have been developing polymers and other materials they hope to someday use to create artificial muscles that, when given an electrical charge, mimic the real thing more cheaply and effectively than the hydraulic systems and electric motors used today. A group of scientists at the University of Texas at Dallas' Alan G. MacDiarmid NanoTech Institute reports in Science today that they have demonstrated a fundamentally new type of artificial muscle, consisting almost exclusively of carbon nanotubes, which can operate at extreme low temperatures that would cause other artificial muscles systems to freeze and at very high temperatures that would cause other muscle systems to decompose.

The new artificial muscle is actually a transparent "aerogel" sheet (so called because most of the volume in the sheet is either air or vacuum). The aerogel consists of aligned carbon nanotubes that run through the material: The sheet's "specific strength" (strength divided by density) exceeds that of the strongest steel plate when an attempt is made to stretch it in the same direction that the nanotubes are aligned, Baughman says. However, the material does stretch more easily when pulled in a lateral direction. "This material has these properties whether or not it is charged," he adds.