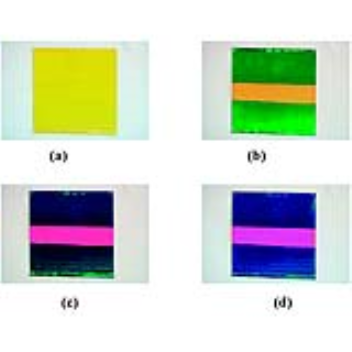 Scientists in Britain have come up with what appears a very sensible idea - a team at Strathclyde University in Scotland have developed an early warning sunburn indicator - it comes in the form of a thin strip which turns pink after too much exposure to ultra-violet light.

The scientists say overexposure to ultraviolet radiation (UVR) is a recognised health hazard and acute effects from short-term exposure include sunburn (erythema) and photo-conjunctivitis - long-term exposure can lead to chronic conditions such as photoaging, skin cancer and cataracts.

The strip is filled with "intelligent ink", which turns pink after too much exposure to ultra-violet light, can be worn as a bracelet or label on clothing and costs as little as 20p each to produce and can be set to suit different skin types.

Professor Andrew Mills, who led the team, says the strips and labels respond to UV light and change colour at a rate which depends on a person's skin type - the printable, multicomponent, UV-sensitive indicator strip provides different coloured, flag-like warnings of the approach of sunburn.