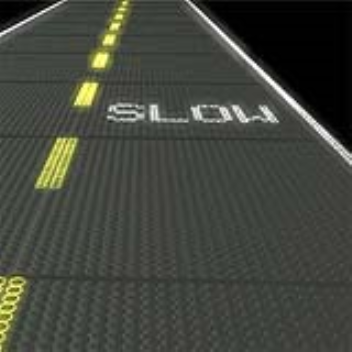 The panels, designed by Solar Roadways founder Scott Brusaw, contain embedded LED lights that might eventually act as a "smart" system, providing travel lines as well as timely warnings to drivers about roadblocks and wildlife up ahead. At the same time, embedded heating elements in the panels could prevent snow and ice from building up on the road.

Once a prototype is complete, Solar Roadways still has a long ways to go before its technology is commercialized. But if and when it is, Brusaw estimates that covering the entire U.S. interstate highway system with his 12" by 12" panels could fulfill the country's energy needs (based on each panel producing 7.6 kilowatt hours of power each day).

It's an expensive plan - each panel costs approximately $6,900 - but a single four-lane, one-mile road plastered with Solar Road Panels could provide enough power to take 500 homes off-grid. And potentially, the panels could even create an "intelligent highway that will double as a secure, intelligent, decentralized, self-healing power grid which will enable a gradual weaning from fossil fuels." A lofty goal, to be sure, but one that is worth keeping in mind, especially now that the government has given Solar Roadways the go-ahead.