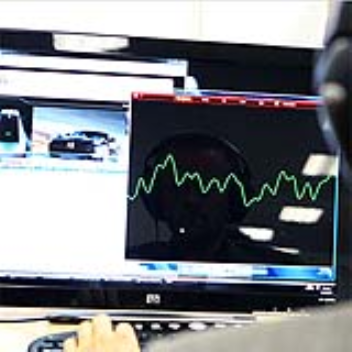 Hybrid Cars May Include Fake Vroom for Safety

For decades, automakers have been on a quest to make cars quieter: an auto that purrs, and glides almost silently in traffic.

They have finally succeeded. Plug-in hybrid and electric cars, it turns out, not only reduce air pollution, they cut noise pollution as well with their whisper-quiet motors. But that has created a different problem. They aren't noisy enough.

So safety experts, worried that hybrids pose a threat if pedestrians, children and others can''t hear them approaching, want automakers to supply some digitally enhanced vroom. Indeed, just as cellphones have ring tones, "car tones" may not be far behind - an option for owners of electric vehicles to choose the sound their cars emit.

Working with Hollywood special-effects wizards, some hybrid auto companies have started tinkering in sound studios, rather than machine shops, to customize engine noises. The Fisker Karma, an $87,900 plug-in hybrid expected to go on sale this year, will emit a sound, pumped out of speakers in the bumpers, that the company founder, Henrik Fisker, describes as "a cross between a starship and a Formula One car."