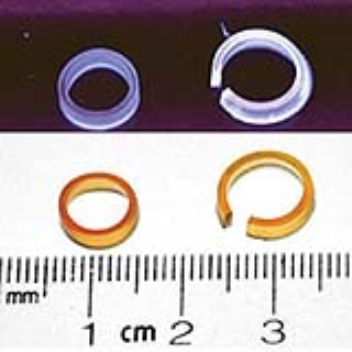 Many research groups are trying to develop materials with similar properties to muscles. One of the big difficulties is creating anything with just the right muscle-like elasticity--its ability to change shape while withstanding a large strain. Now researchers at the University of British Columbia (UBC) in Vancouver, Canada, have synthesized a protein-based material that stretches exactly like the real thing.

The new material achieves the elasticity of muscle by mimicking the microscopic structure of a giant muscle protein called titin. The structure of titin resembles a string with beads--globules of folded protein sequences are connected by floppy, unstructured sequences. Hongbin Li, a chemist at the UBC, and his colleagues constructed the new material that imitates this structure. They chose a mechanically stable protein sequence that folds in on itself to form globules, and another protein called resilin to serve as the floppy connectors.

The result was a "mini-titin"--a protein that resembled titin structurally but is much smaller, Li says. The researchers chemically linked the individual protein strands together to form a hydrogel--a light, solid material that consists mostly of water--and then tested the material's mechanical properties.