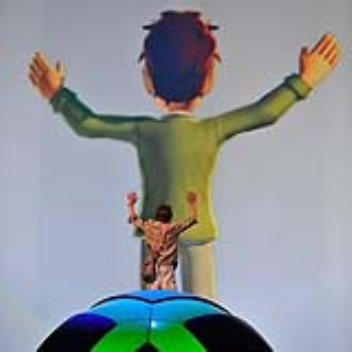 There's a growing movement in video games - motion control. And Microsoft's latest twist: Its new system for the Xbox 360, dubbed Kinect and being unveiled this week, requires no controller at all.

The 4-year-old Xbox 360 has long seemed targeted at hard-core gamers, with a controller that could be intimidating.

"For lots of people, that controller is a barrier," says creative director Kudo Tsunoda. "We set out to make a new control paradigm where anybody can get in and play, without having to read the instructions or learn a complicated set of controls."

Kinect's built-in camera and microphone (due later this year, no price set) uses facial and voice recognition to let you, for instance, log onto Xbox Live, start games and pause movies. And a new menu lets you choose games or services such as Netflix by simply reaching out and pointing toward the screen selection. Video chat lets Xbox 360 homes connect; the smart camera widens when another person enters the room.

Microsoft's Marc Whitten credits Nintendo with setting things in motion: "They have done some amazing things and brought new people to the category. This is fundamentally different. It's (about) my body being the controller (and) being able to communicate with just my voice to the system."