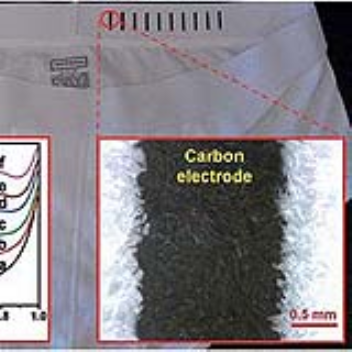 As the focus on healthcare shifts from centralized hospital-based treatment to home-based management, there are growing needs for developing reliable, wearable healthcare monitoring systems. Such on-body (non-invasive or minimally-invasive) physiological monitoring devices are also of considerable interest for defense or sport applications. Integrating sensors and biosensors directly into clothing should thus have major advantages for future healthcare and soldier monitoring systems.

Unlike conventional screen-printed strip electrodes, textile-based thick-film sensors rely on porous substrates and must survive large deformations. This is the first example of textile-based screen-printed amperometric sensors and of studying the role of the clothing deformation upon the resulting performance. The elastic waistband of common underwear has been selected as model clothing owing to its tight contact and direct exposure with the skin, and hence for its potential for direct sweat monitoring. While the present study aims at characterizing the behavior of the textile-based screen-printed electrode transducers (particularly in connection with the clothing deformation), future efforts will focus on such on-body sensing in connection with relevant chemically-selective layers, towards textile-based healthcare and soldier monitoring systems.