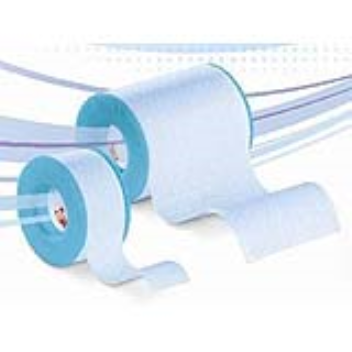 3M, innovators when it comes to anything that sticks, will soon be releasing a new type of medical tape they've created that provides the same level of adhesion as standard tapes, but is far easier to remove. Important not only for the comfort level of patients, but often times injured areas are surrounded with sensitive or fragile skin tissue. Not to mention when body hair gets involved.

The secret to the new tape's gentle demeanor is its silicone-based adhesive technology which has a reduced surface tension allowing it to settle in and hold onto crevices in the skin, while still being reposition-able without losing its stickiness. It also interacts with skin in a different way than traditional acrylate adhesives. So while being removed the energy of the bond between the adhesive and the skin is mostly dissipated through the adhesive, resulting in less pulling, pain and damage to the skin.