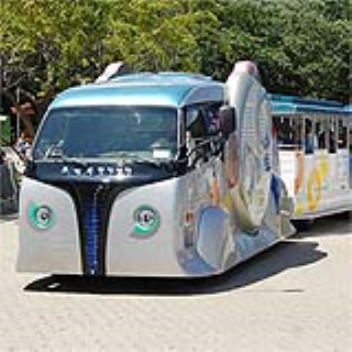 The Korea Advanced Institute of Science and Technology (KAIST) and the city of Seoul celebrated their joint efforts to adopt a green public transportation system and presented park visitors with the three On-Line Electric Vehicles (OLEVs), which will be operated immediately thereafter. Approximately one hundred people, including science high school students across the nation, attended the ceremony and had a chance to ride the trams.

KAIST unveiled the prototype of an electric tram to the public in March 2010, and since then it has developed three commercial trams. The Korean government and the institute have worked on legal issues to embark on the full-scale commercialization of OLEV, and the long awaited approval from the government on such issues as standardization of the OLEV technology and road infrastructure, regulation of electromagnetic fields and electricity safety, and license and permits for vehicle eligibility, finally came through.

The On-Line Electric Vehicle (OLEV) is no ordinary electric car in that it is remotely charged via electromagnetic fields created by electric cables buried beneath the road. Unlike other currently available electric cars, OLEV can travel unlimited distances without having to stop to recharge. OLEV also has a small battery onboard, which enables the vehicle to travel on roads that are not equipped with underground power cables. This battery, however, is only one-fifth of the size of a conventional electric vehicle battery, resulting in considerable savings in the cost, size, and weight of the vehicle.