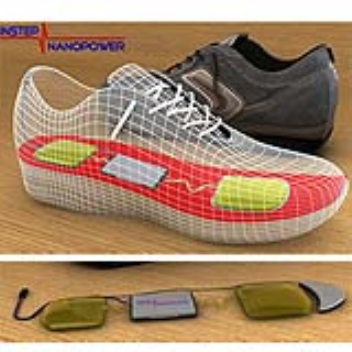 University of Wisconsin-Madison engineering researchers Tom Krupenkin and J. Ashley Taylor have developed an in-shoe system that harvests the energy generated by walking. Currently, this energy is lost as heat. With their technology, however, they claim that up to 20 watts of electricity could be generated, and stored in an incorporated rechargeable battery.

While the details of the energy-harvesting technology are proprietary, it is said to involve a process known as "reverse electrowetting," which was discovered by Krupenkin and Taylor. It converts mechanical energy to electricity via a microfluidic device, in which thousands of moving microdroplets (of an undisclosed non-toxic, inexpensive liquid) interact with "a groundbreaking nanostructured substrate." The process is said to have a power density of up to one kilowatt per square meter (10.76 sq. ft.), plus it works with a wide range of mechanical forces, and is able to output a wide range of currents and voltages.