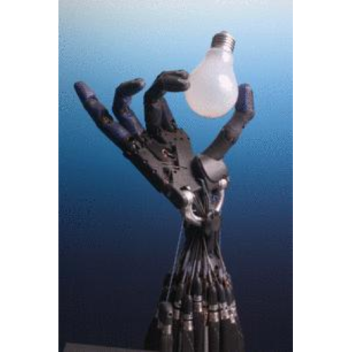 A Robot With Coffee-Balloon Vacuum Hands

You’d think that was a typo, but not so much. Scientists from Cornell, the University of Chicago and iRobot have created human-analogue hands using nothing but coffee grounds, party balloons and a vacuum pump.

Here’s how it breaks down. The human hand is an incredibly delicate instrument, capable of firmly gripping objects and not letting go until we decide we’re good and ready. Robot hands tend to be both clunky and metallic, and often result in dropped items.

The secret lies in the coffee. Not so much in the blend, but in the grounds themselves. Coffee grounds a “particulate material”, which contains individually solid particles that are present in large aggregate clumps. Particulate materials have what is known as a “jamming transition” that occurs when they are compressed and the particles go from being able to slide past each other (like a liquid) to jammed together (like a solid).

Our robot’s hand starts with an ordinary party balloon filled with coffee grounds, but not with air. When an object needs to be gripped, the balloon-ended arm reaches out and contacts it, and the coffee grounds easily deform around it. In order to firm the grip, a vacuum is used to pull all of the air out of the balloon, slamming the coffee grounds together and making them one solid, tightly-gripping mass.

When the time comes to let the object go, the vacuum is released, and the coffee grounds un-jam themselves and start sliding around again.