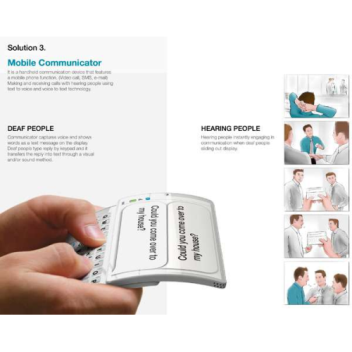 The Communicaid Visual Sound Station is designed to capture certain sounds such as doorbells and fire alarms and translate them into understandable images. The Visual Sound Glasses are designed for outdoor use, and tell the wearer what direction a sound is coming from, and how loud it is via a series of LED lights placed near the eyes. The final piece of the Communicaid Sound System is the Mobile Communicator, a cellphone-like device that captures and translates conversation.

The Communicaid Sound System is still just a concept, but hopefully at least one of these gadgets will become a reality soon.