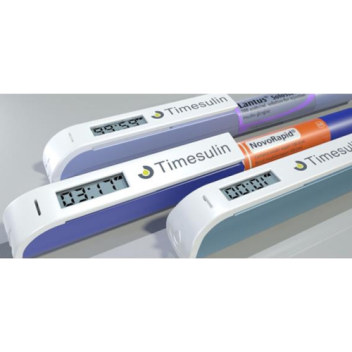 According to a recent global survey, one in three people with diabetes fail to take their insulin as prescribed, as a result of forgetting when they took their last dose. This means they either skip a dose or take a dose too soon, and the stress of having to remember can be a constant source of anxiety. Hoping to rectify this, and provide relief from that anxiety, Timesulin is a replacement cap for insulin pens which shows how much time has passed since the last use.

Timesulin was launched in 2011, was founded by John Sjölund, Marcel Botha and Andreas Sjölund in 2009, and is based in Germany, Sweden and the UK. To use Timesulin, the cap of a standard insulin pen is replaced by the battery operated Timesulin cap. The pen is then transformed into a “smart pen”. If the cap is removed from the pen for longer than eight seconds, it assumes the user has taken an injection and the LCD screen-timer is reset. It will continue to display in hours and minutes the time that passes until the next instance the cap is removed. The timer will not reset if the cap is removed for less than eight seconds, taking into account that sometimes users will need to check the level of insulin left in the pen. It has been designed for users of all ages, with no buttons to push or programming required.