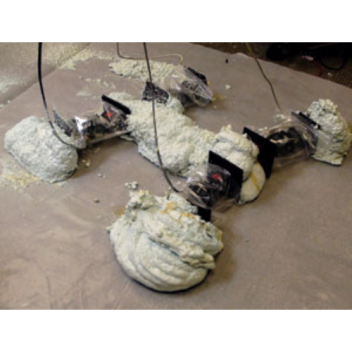 Robot builds its own body

Like a sculpture that springs to life, a new type of robot makes its own body parts using spray-on foam. Such a design could one day be useful in situations in which the exact type of robot needed is not known beforehand, such as space exploration or reconnaissance.

Created by Shai Revzen and colleagues at the University of Pennsylvania Foambot consists of a wheeled "mothership" platform along with several simple joint modules capable of powered bending and flexing. The platform has an on-board supply of chemical reagents and a spray nozzle; when mixed, the reagents expand into hard urethane foam. First the remote-controlled platform arranges the modules on the floor and then it sprays the foam to connect them into the required form.

Software then analyses the orientation of the powered joints and devises a coordination scheme to animate the resulting bot.

Revzen says the system would be useful for situations in which robots need to navigate unforeseen obstacles. A snake-like body might be better for crawling around rocks, for example, while a quadruped might be better at traversing open ground. Since Foambots can return to the mothership to be modified, they could be used to deal with an array of tasks.