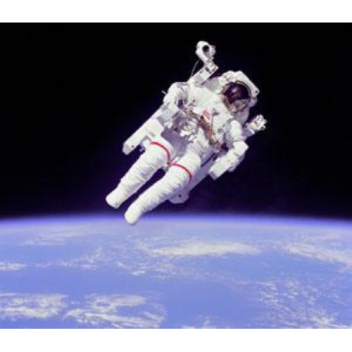 IT MUST be an astronaut's worst nightmare: floating helplessly away from your spacecraft with no hope of rescue. Such fears could be calmed by a "tractor beam" that needs no exotic physics: a laser that vaporises small thrusters on a spacesuit to push an errant spacewalker to safety.

The idea first emerged last year when John Sinko, an engineer now at Ohio State University in Newark, proposed it as a way to de-orbit space junk.

Now, working with Clifford Schlecht at the Institute for Materials, Energetics and Complexity in Greenville, South Carolina, Sinko is developing a prototype device that could save astronauts lost in space.

In Sinko's original plan, spacecraft carry thrusters with two types of propellant, each responding to a different laser wavelength. To fire a thruster, a laser beam is shone on it, vaporising propellant to create thrust and so push the spacecraft onto a new course. The propellants fire in different directions, so the spacecraft can be steered.

Sinko and Schlecht say that if those space-junk thrusters were scaled down and fitted onto a spacesuit, with tubes to vent propellant away from the astronaut, you would have a way to retrieve a spacewalker who is spinning into the void. You could even apply small thrusters to astronauts' toolboxes.

Existing rescue systems - spring-loaded or gas-driven tethers that can be fired towards an astronaut - can't reach more than 100 metres. And astronauts venturing outside the International Space Station must wear a jet pack of nitrogen thrusters. But none of these safety measures can help an astronaut who is incapacitated. The tractor beam would.

Sinko and Schlecht's calculations suggest their technique will work. By pulsing a carbon-dioxide laser on a 1-kilogram thruster for 200 seconds, they reckon they can move an astronaut back towards safety at 1 metre per second.