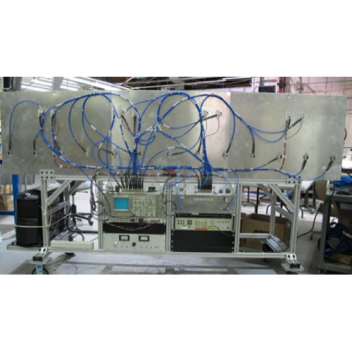 MIT researchers have developed radar technology that provides real-time video of what is happening behind solid concrete walls measuring four to eight inches (10-20 cm) thick. Just like any other radar, the device emits radio waves that bounce off objects and then analyzes the return signal, but to give it its X-ray spec capabilities, the newly developed radar technology disregards the 99.9975 percent of the signal that returns to the radar after bouncing off the wall and amplifies the remaining 0.0025 percent of the signal that makes it through. This amplified signal is then used to generate a real-time, video "image" of targets on the other side, providing a potentially valuable tool for urban combat situations.

The 8.5 foot (2.6 m) long device uses an array of 21 antennae (13 transmitting and eight receiving), a National Instruments circuit board, a gaming PC and some clever algorithms to generate a bird's-eye-view of the space behind the wall. In deciding what radio wavelength to use, the MIT team had to choose between longer wavelengths that are better able to pass through the wall and back but require a correspondingly larger radar apparatus to resolve individual human targets, and shorter wavelengths that can suffer signal loss.

They settled on S-band waves, which have approximately the same wavelength as wireless Internet at about 10 cm (3.9 in). Overcoming the signal loss of these shorter wavelength waves required the use of amplifiers, which allowed the actual radar device to be kept to around 8.5 feet (2.6 m) long.