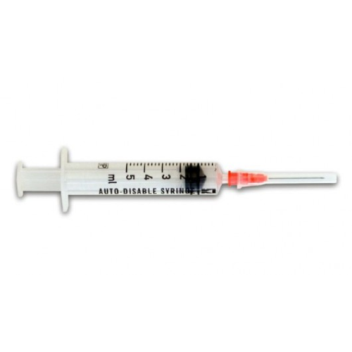 Self-destructing syringe is made to save lives

In these days of reducing, reusing and recycling, it may seem strange that anyone would be going out of their way to make a potentially reusable product disposable. It all makes sense, however, when that product is a syringe. According to the World Health Organization, every year approximately 1.3 million people die worldwide, due to diseases contracted through the reuse of syringes. Part of this can be chalked up to needle-sharing by users of illicit intravenous drugs, but much of it is due to health care workers (particularly those with little training or in impoverished conditions) using the same syringe to inoculate multiple patients. If a syringe simply ceases to function after one use, however, reusing it is impossible. That's the idea behind Star Syringes' K1 Auto Disposable syringe.

The K1 incorporates a small ring, that is etched onto the inside of the syringe barrel. A specially-adapted plunger is able to move past that ring when it's delivering an injection, but cannot be drawn back over it - if it's forced, the end of the plunger will snap off inside the syringe. The technology can be licensed to regional syringe-making companies, that will only need to make a minor adjustment to the molding process in their existing production lines. It will reportedly cost them no more to manufacture than a conventional syringe.

Because the syringes can't be reused, that does mean that organizations using them will have to spend more money on supplies, as a new syringe will be required for each injection. The savings that will be experienced through lowered health care costs due to the reduced spread of diseases such as hepatitis B, however, should more than make up the difference.

Star Syringes also makes a needle cap that protects users against accidental needlesticks, and an aspiration device that is said to make injections quicker and more accurate.