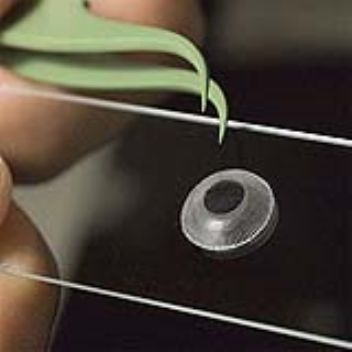 Corneas are shield the eye from dust and germs. They also act as theeye's outermost lens, contributing up to 75 percent of the eye'sfocusing power. Chemical engineer Curtis W. Frankpresented a novel biomimetic material that's finding its way intoartificial corneas. It's a hydrogel, or polymer that holds a lot ofwater. That material may promise a new view for at least 10 millionpeople worldwide who are blind due to damaged or diseased corneas ormany millions more who are nearsighted or farsighted due to misshapencorneas.Called DuoptixTM, the material can swell to a watercontent of 80 percent about the same as biological tissues. It's madeof two interwoven networks of hydrogels. One network, made ofpolyethylene glycol molecules, resists the accumulation of surfaceproteins and inflammation. The other network is made of molecules ofpolyacrylic acid, a relative of the superabsorbent material in diapers."Think of a fishnet, but think of a 3-D fishnet, It's a strong,stretchy material." That makes it able to survive suturing duringsurgery. The biocompatible hydrogel is transparent and permeable tonutrients, including glucose, the cornea's favorite food.