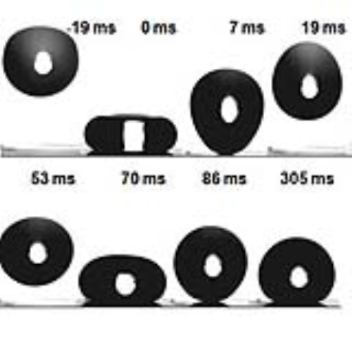 Coating Promises the End of Smudges

German researchers armed with smoking candles have come up with a cheap and easy way to coat surfaces so that oil droplets bounce or roll right off. The advance could eventually lead to eyeglass coatings and tablet computer screens that can evade the mark of even the greasiest fingerprints.

Making surfaces able to repel fluids—whether water- or oil-based—is also important for industrial and biomedical applications. But it's harder to make a surface that repels oil or organic solvents as opposed to water because oil has a far lower surface tension than water.

What's required is a very specific type of surface roughness—akin to the branches of a budding tree—that achieves oil-repellency. This has been understood for some time, but it has been difficult to fabricate such a texture. Earlier work at MIT and elsewhere involved complex nanolithographic techniques.

Researchers at the Max Planck Institute for Polymer Research in Mainz, in a paper published today in the journal Science, say they've come up with a simpler way, using a combination of candle soot and silica baked at just the right temperature.

First they held the glass slide over a heart-shaped candle (though any candle will do). This led to the deposition of soot on the slide—spheres of soot that were 30 to 40 nanometers in diameter, stacked loosely and producing the right kind of surface texture: about 80 percent empty and 20 percent spheres.

To protect the soot from washing away, they coated it with a silica shell 25 nanometers thick; to get rid of the black color of the soot, they baked the slide at 600 ºC, making it transparent. Afterward, they sprayed various oils—peanut oil and solvents—and took micrographs of these liquid droplets bouncing up and down like ping-pong balls.

The coating sticks to aluminum, steel, and copper, too. And because it has both oil- and water-repelling qualities, the material is said to be "superamphiphobic."

Neelesh Patankar, a mechanical engineer at Northwestern University, says the work is an important step toward finding a commercially viable way to make such materials. "It has been known what surface chemistry as well as geometries would work" to repel oils, he says. "This work shows a good way to make such coatings with the right kind of practically relevant properties."