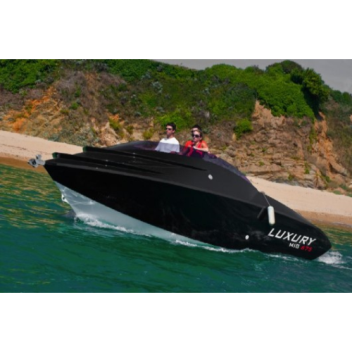 MIG 675 draws its power from the water

If money is no object to you, but environmental concerns are, then LUXURY's MIG 675 might be your kind of boat. The 22 x 8-foot (6.7 x 2.5-meter) cruiser seats three, has a top speed of 70 mph (113 km/h), and produces emissions consisting of nothing but water vapor - this sucker is hydrogen-powered.

Instead of carrying pressurized hydrogen tanks, the MIG 675 reportedly produces its own fuel, using an onboard generator that harvests hydrogen from the surrounding seawater. This powers its 500 HP supercharged engine, providing a cruising speed of 45 mph (72.5 km/h) and the previously-mentioned 70 mph top end.

The hydrogen generator also powers all the onboard electrical devices, which include an electric anchor roller, a 10-inch touchscreen controller, GPS, depth finder, rear-view camera, an Alpine audio system, a bar fridge with an electric retractable table, and an LED navigation lighting system.

Other features of the 2,866-pound (1,300-kg) aluminum-hulled watercraft include a shower, toilet, leather interior, sun deck, and teak floor. It also, so we're told, comes with its own set of dental forceps - perhaps there was a problem with the French-English translation, with that one.

The LUXURY website claims that the MIG 675 features "live [hydrogen] production during navigation," although one has to wonder ... does this mean that the boat could theoretically just keep running indefinitely, or does its hydrogen consumption exceed its hydrogen production?