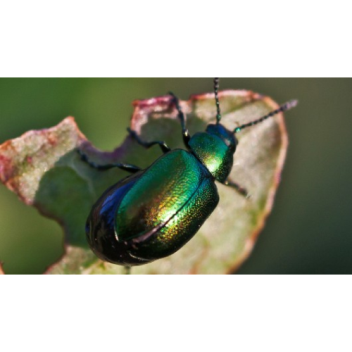 Arthropods have an outer skeleton made up of a composite material called cuticle that consists of layers of a polysaccharide polymer called chitin and protein organized in a laminar, plywood-like structure. In its unmodified form, which can be seen in the body wall of a caterpillar, chitin is translucent, pliable, resilient and quite tough, but arthropods are able to modify its properties to make it tough and rigid, as seen in the body wall of a beetle, or to make it elastic, as seen in arthropod limb joints. Not only does cuticle protect the arthropod's internal components and provide structure for muscles and wings, it does so without adding weight or bulk.

It was this extraordinary strength, toughness and versatility that researchers at the Wyss Institute for Biologically Inspired Engineering at Harvard University claim to have replicated with the development of a Shrilk. By recreating the unique chemistry and laminar design of arthropod cuticle in the lab, Wyss Institute postdoctoral fellow, Javier G. Fernandez and Wyss Institute Founding Director Donald Ingber were able to engineer a thin, clear film that has the same composition and structure as arthropod cuticle.

Dubbed Shrilk because it is composed of fibroin protein from silk and from chitin, the material is similar in strength and toughness to aluminum alloy, but is only half the weight. Since chitin can be extracted from discarded shrimp shells it can be produced at very low cost. It is also biodegradable and can be molded into complex shapes. By controlling the water content in the fabrication process, the researchers were also able to vary the stiffness of the material, ranging from elastic to rigid.

The researchers say that these attributes make Shrilk suitable for a wide range of applications, including providing a cheap, environmentally safe alternative to plastic, and for making garbage bags, packaging, and diapers that degrade quickly. Since it is also biocompatible and strong, it could also be used to suture wounds that bear high loads, such as hernia repair, or as a scaffold for tissue regeneration.