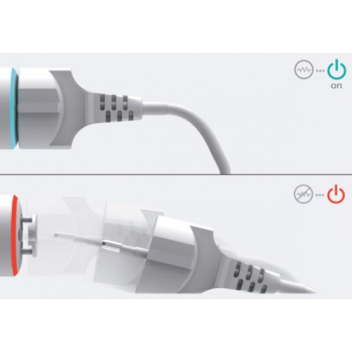 For years, environmentalists have warned that keeping electronics plugged in all the time wastes energy, even when a device is switched off. Even for less green-conscious consumers this lost energy can add up on the electric bill each month, so disconnecting unused devices or switching them off at the wall is really a good habit for anyone to get into. But let's be honest, it's hard to remember to unplug each gadget every single time it's used. To help with this, designers have created the PumPing Tap, a concept electrical socket that can detect an unused power cord and physically eject it from the wall.

The PumPing Tap is actually pretty simple in design. Sensors in the circuit detect whether the plug is actively using electricity, and, if it isn't, the light on the outside turns from blue to red. Ten minutes later, if the device is still switched off, a spring-loaded mechanism pops the plug out of the socket like a projectile from a toy dart gun. As far as methods for cutting down on power consumption go, this one is very direct. The PumPing Tap was even one of the winners of the Red Dot Design Concept award.