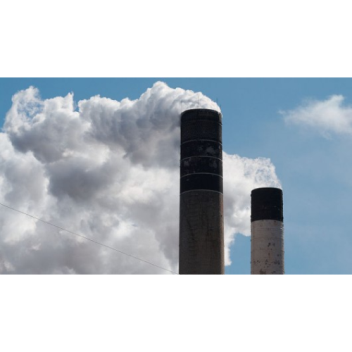 A commonly-available, inexpensive polymer has been shown to be very effective at capturing carbon dioxide from sources such as smokestacks (Photo: Dori)

In recent years, worries over global climate change caused by excess atmospheric carbon dioxide have led to a number of technologies all aimed at the same thing - capturing human-generated CO2 at the source. These have included the use of things such as edible sponges, molten salts and bacteria, to name just a few. Now, a group of scientists is claiming success with a process that has achieved "some of the highest carbon dioxide removal rates ever reported for humid air" ... and it uses a common and inexpensive polymer.

According to Alain Goeppert, G. K. Surya Prakash, chemistry Nobel Laureate George A. Olah and their colleagues, existing methods of CO2 removal can be energy intensive, ineffective, or are otherwise less than ideal.

The process that they created utilizes a filter containing the polymer polyethylenimine. Under conditions that reportedly thwarted other, related materials, it was able to effectively remove CO2 from sources such as smokestack effluent, tailpipe emissions, or even directly out of the open atmosphere.

The polyethylenimine easily released the trapped carbon dioxide on demand, so that it could be used in industry, or more permanently stored. Once it has released its CO2 load, the polymer can apparently be recycled and reused many times, without losing efficiency.

Besides its use in the reduction of greenhouse gases, the scientists suggest that it could also be used in air purification systems, such as those found on submarines.