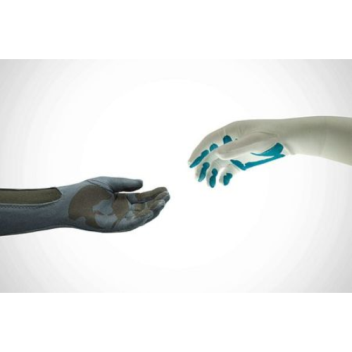 We’ve already encountered many high-tech equipments that are helpful to people who have lost their limbs during a mishap, but few of them are as surprising as the intelligent touch-sensitive gloves designed by Daniel Kamp for prosthetic arms.

The gloves are made based on a fabric that can easily register stretch, compression and pressure, as well as certain sensors. Individual sensors have been placed on the palm, thumb and four fingers, which will result the electric current passing through these sensors to change whenever pressure is applied onto any of the sensors. Current is carried from the battery placed in the upper arm cuff to the fingers and back, and the circuit board in the cuff registers all the changes in electric resistivity and changes them into electrical outputs. Once the electrical pulse is given to the skin, the glove will then judge which part, palm, finger or thumb, caused the circuit change, and thus let the users to feel the stimulation with their remaining limb.