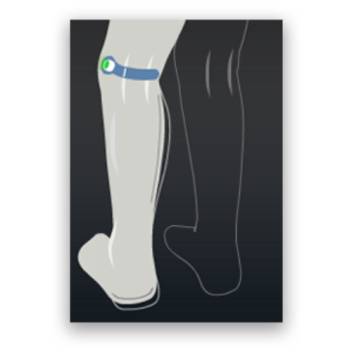 Deep vein thrombosis is reportedly the cause of death of 25,000 Britons and 200,000 Americans every year. UK-based Geko believe current devices designed to address the problem are cumbersome and ineffective, and have therefore launched a wristwatch-sized, self-adhesive band which reduces the risk of clotting by stimulating blood flow.

Geko was developed by Sky Medical as a simple solution for those at risk of DVT. The disposable device weighs 16 grams and attaches to the back of the patient’s knee. Powered by a wristwatch-sized battery, two electrodes stimulate the peroneal nerve which causes micro-contraction of the calf muscle and increased local blood circulation. The action simulates the process normally achieved by walking but without the patient having to move. The software is controlled by a single button, with seven levels of stimulation indicated by a flashing green LED. The one-size-fits-all device can be applied in 60 seconds and is designed to allow for full freedom of movement. The battery lasts for 24 hours, after which the device can be disposed of safely as clinical waste.