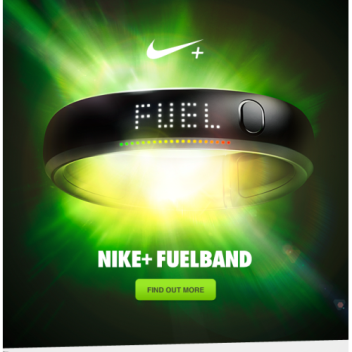 Nike today introduced its FuelBand wristband device, which is designed to measure a person's daily movement and drive the athletic gear company further into the technology world.

The FuelBand is designed to provide users with the time, the number of steps taken in a day, and calories burned. But the main selling point is a newly created fitness metric called NikeFuel, which is based off the rate of oxygen consumption and motion. The wristband will retail for $149, and is available on February 22 in the U.S., May 1 in the U.K., and the rest of the world in the fall.

The FuelBand represents the next step for a company that waded into the connected devices world with its Nike Plus products, which were designed to track how far and fast runners went. (The company plans to have its Nike Plus products start offering NikeFuel readings in the summer.) But with NikeFuel and FuelBand, the company is fully embracing a world where its products integrate with smartphones, PCs, social media, and the Internet. Nike's pitch to athletes is the FuelBand doesn't just track runners; it measures all activity.

"Before, there was no simple metric that worked across different activities," said Stefan Olander, vice president of digital sports for Nike, who boasted that NikeFuel was based on a scientifically validated method of measuring oxygen consumption.

Nike's attention to the metric is what the company believes will be the key to the FuelBand's success. Users get positive feedback from the accompanying free smartphone app when they hit certain benchmarks. For instance, they get a message saying you're "on fire" when you hit a certain score. Users are also encouraged to share their scores through social media and the Web, although Olander acknowledged that the extent of sharing depends on the comfort level of individuals.